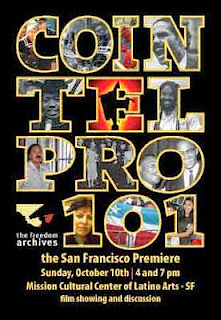 During the Civil Rights era of the 50s, 60s and 70s, the F.B.I, under the leadership of J. Edgar Hoover, waged a covert war against minority peoples and progressive movements referred to as, COINTELPRO.

COINTELPRO represents the state’s strategy to prevent movements and communities from overturning white supremacy and creating racial justice. COINTELPRO is both a formal program of the FBI and a term frequently used to describe a conspiracy among government agencies—local, state, and federal—to destroy movements for self-determination and liberation for Black, Brown, Asian, and Indigenous struggles, as well as mount an institutionalized attack against allies of these movements and other progressive organizations.

COINTELPRO 101 is an educational film that will open the door to understanding this history. This documentary will introduce viewers new to this history to the basics and direct them to other resources where they can learn more. The intended audiences are the generations that did not experience the social justice movements of the sixties and seventies.

Interviews in the video include:

*Film will be followed by a discussion lead by participants in the film, Ricardo Romero (Chicano/Mexicano Activist) and Ward Churchill (Native American Author & Professor).

"We hold these truths to be self-evident, that all men are created equal, that they are endowed by their Creator with certain unalienable Rights, that among these are Life, Liberty, and the Pursuit of Happiness." - Declaration of Independence

"America, when will you live up to your own principles?" - Leonard Peltier

Posted by Unknown at 2:36 PM No comments:
Email ThisBlogThis!Share to TwitterShare to FacebookShare to Pinterest

WHEREAS, the Black Hills Sioux Nation Treaty Nation Council assembled in quorum along with representatives of the Lakota, Nakota and Dakota Nations present from January 27‐29 2011 at the Prairie Winds Casino on the Pine Ridge Reservation, and

WHEREAS, Leonard Peltier was one of a number of warriors who came to the defense of the Oyate and the traditional government after repeated acts of violence by agents of the United States government and others subject to U.S. government jurisdiction, and

WHEREAS, Leonard Peltier’s conviction is built upon fraudulent affidavits coerced by the Federal Bureau of Investigation and bolstered by falsified physical evidence from the F.B.I. lab, and

WHEREAS, Leonard Peltier has been illegally held as a political prisoner by the United States government since 1976,

NOW THEREFORE BE IT RESOLVED, that the Black Hills Sioux Nation Treaty Council declares that the continued imprisonment of Leonard Peltier by the United States government is illegal, immoral and unjust, and

BE IT FURTHER RESOLVED, that the Black Hills Sioux Nation Treaty Council demands the immediate release of Leonard Peltier.

Posted by Unknown at 9:48 AM No comments:
Email ThisBlogThis!Share to TwitterShare to FacebookShare to Pinterest

Posted by Unknown at 4:05 PM No comments:
Email ThisBlogThis!Share to TwitterShare to FacebookShare to Pinterest 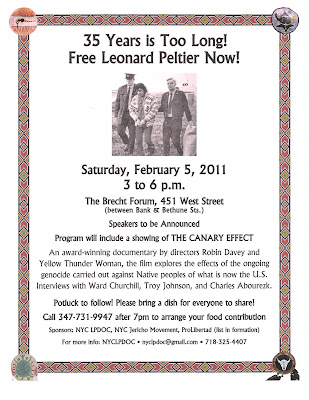 Posted by Unknown at 2:38 PM No comments:
Email ThisBlogThis!Share to TwitterShare to FacebookShare to Pinterest 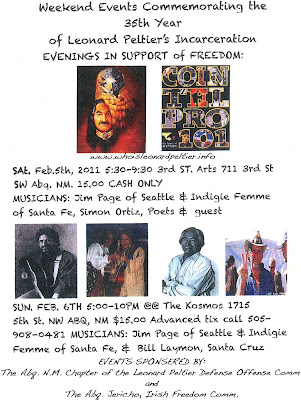 And your Super Bowl alternative:

These events are part of the weekend events in Albuquerque commemorating the 35th anniversary of Leonard Peltier's arrest. Sponsored by the ABQ LPDOC Chapter and the Leonard Peltier Defense Offense Committee, with ABQ-Jericho and the Irish Freedom Committee.
Posted by Unknown at 2:27 PM No comments:
Email ThisBlogThis!Share to TwitterShare to FacebookShare to Pinterest

Screening of COINTELPRO 101, Albuquerque (NM) Peace and Justice Center, 202 Harvard SE. 6:00-10:00 p.m. $5.00 Admission. Followed by a talk with producer Claude Marks and other guests. This event is part of the weekend events in Albuquerque commemorating the 35th anniversary of Leonard Peltier's arrest. Sponsored by ABQ-Jericho. Contact: 646-271-4677 or albqjericho@gmail.com.

Posted by Unknown at 2:22 PM No comments:
Email ThisBlogThis!Share to TwitterShare to FacebookShare to Pinterest

Fargo, N.D. — For nearly 150 years, the voices of Dakota men imprisoned after the Dakota Conflict of 1862 went unheard.

But the details of their imprisonment are starting to emerge, in letters written by those prisoners after six weeks of fighting along the Minnesota River Valley that left hundreds of Indians, settlers and soldiers dead.

In a tiny office at North Dakota State University in Fargo, Clifford Canku has spent 10 years poring over the faint handwriting with a magnifying glass.

"One letter would take about a week," said Canku, a Dakota elder who teaches Dakota language at North Dakota State. Canku is one of three lead translators on the project, which has unearthed never-before revealed details of a turbulent episode in Minnesota history.

Some of the letter writers talk about the war; others describe prison life.

"We're very cold, and they took the stove away from us," one prisoner wrote. "It's way below zero and we're freezing. A lot of people have died."

The letters add important first-person perspective to a troubling time in history, said professor Bruce Maylath, one of Canku's colleagues in the NDSU English Department. They plan to publish 50 of the letters.

Read more
Posted by Unknown at 2:15 PM No comments:
Email ThisBlogThis!Share to TwitterShare to FacebookShare to Pinterest

Dr. Martin Luther King, Jr. in His Own Words

Posted by Unknown at 10:38 AM No comments:
Email ThisBlogThis!Share to TwitterShare to FacebookShare to Pinterest

Join the National Day of Action on Tuesday, January 25, 2011

In December 2010, under the direction of U.S. Attorney Patrick Fitzgerald, the FBI delivered 9 new subpoenas in Chicago to anti-war and Palestine solidarity activists - bringing the total number of subpoenaed activists to 23. Patrick Fitzgerald’s office is ordering the 9 to appear at a Grand Jury in Chicago on January 25.


In response, activists are calling for protests across the country and around the world. We endorse this action to show our solidarity. Hundreds of organizations and thousands of people will be protesting at Federal Buildings, FBI offices, and other appropriate places, showing solidarity with the 9 newly subpoenaed activists and with all the activists whose homes were raided by the FBI.

Fitzgerald’s expanding web of repression already includes the 14 subpoenaed when the FBI stormed into homes on September 24th, carting away phones, computers, notebooks, diaries and children’s artwork. In October, all fourteen activists from Chicago, Minneapolis, and Michigan decided to not participate in the secret proceedings of Fitzgerald’s Grand Jury. Each signed a letter invoking their Fifth Amendment rights. However, three women from Minneapolis - Tracy Molm, Anh Pham and Sarah Martin - are facing re-activated subpoenas. They are standing strong and we are asking you to stand with them – and with the newly subpoenaed nine activists – by protesting Patrick Fitzgerald and his use of the Grand Jury and FBI to repress anti-war and international solidarity activists.

Defend free speech! Defend the right to organize! Opposing war and occupation is not a crime!

Please organize a local protest or picket in your city or on your campus and e-mail stopfbi@gmail.com to let folks know what you have planned.

Posted by Unknown at 2:40 PM No comments:
Email ThisBlogThis!Share to TwitterShare to FacebookShare to Pinterest