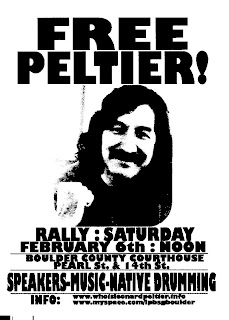 On Saturday, February 6, the Leonard Peltier Defense Offense Committee will host a rally at noon at the Boulder County Courthouse for Leonard Peltier. This is to commemorate the 34th anniversary of his arrest and incarceration. Leonard Peltier was convicted in the deaths of two FBI agents at a shootout that the agents started on the Pine Ridge Reservation. After his conviction, his defense obtained thousands of documents showing that the government had fabricated evidence, committed perjury, and had no idea who had actually killed the agents. Despite international calls for a new trial from Amnesty International and other organizations, as well as millions of people worldwide, Leonard is still behind bars. There will be speakers, music and a Native drum group. The Courthouse is located on the Pearl street Mall between 13th and 14th Streets.

Posted by Unknown at 11:22 PM
Email ThisBlogThis!Share to TwitterShare to FacebookShare to Pinterest