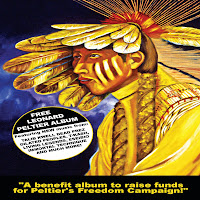 This event features special guests Rakaa of Dilated Peoples & Arievolution signing copies of the new album, Free Leonard Peltier: Hip Hop's Contribution to the Freedom Campaign. There will be a listening party for the new album, as well as food and drinks available.

Supporters are invited to voice their support for Leonard for a new documentary; filming will occur during the event. Also, the Free Peltier Album will be available for sale.

Posted by Unknown at 9:54 AM
Email ThisBlogThis!Share to TwitterShare to FacebookShare to Pinterest