On August 6-7, a host of international activists gathered near the federal penitentiary in Lewisburg, PA for an evening candlelight vigil and morning rally in support of Leonard Peltier. Peltier, who has been behind bars for over 35 years, was convicted in 1977 of the murder of two FBI agents on the Pine Ridge Indian reservation in South Dakota. His case stands as one of the worst miscarriages of justice ever perpetrated upon an American citizen. 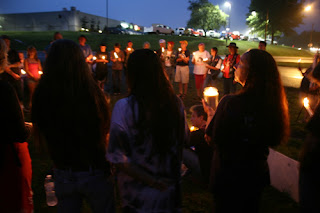 During the 1970s, Pine Ridge, SD had the highest murder rate per capita in the nation, the result of strife between AIM activists and corrupt tribal police. The FBI had been complicit in the harassment of AIM sympathizers and so-called “traditionals.”

In June 1975, a firefight broke out on a rural ranch between two FBI agents and a group of AIM Indians. Both agents were killed at close range. In the tense, war-like conditions of Pine Ridge, the shooting began before the FBI agents could identify themselves.

Despite the presence of multiple police agencies, the Indians – which included women and children – were able to escape. Peltier was later captured the following year. In his ensuing trial, it was clear that evidence had been fabricated and witnesses were coerced. Both murders were pinned on Peltier despite the fact that two other Indians – who were present at the shooting scene – had already been acquitted. Peltier was sentenced to two life terms.

The government has conceded that it cannot be certain Peltier was responsible. Unfortunately, his court appeals have failed. Sadly, he has been denied clemency by the past three Presidents. Many believe President Obama may grant him clemency if he fails to be reelected. It remains to be seen; the FBI continues to vigorously oppose such a notion.

Behind bars Peltier has become an outstanding artist, what “keeps me alive,” he says. However, at present Peltier is unable to paint, in a 23-hour lockdown for 60 days for possession of currency not authorized by the penitentiary.

While in prison, Peltier has become a leading spokesperson for Native rights and has been nominated for the Nobel Peace Prize six times. His case has gained international interest.

Among the vigil attendees were supporters from across the nation and from as far away as Germany. Peltier’s sister, Betty, arrived from North Dakota. She has been prevented from visiting her brother and worries about his health; Peltier, 67, suffers from a heart condition. Attorney Michael Kuzma was also in attendance. He called the process of defending Peltier “extremely difficult,” as the federal government has incarcerated him with continuing malice.

To learn more about Leonard Peltier, visit whoisleonardpeltier.info or watch Incident at Oglala, the excellent documentary narrated by Robert Redford, which chronicles the government conspiracy to make Peltier the scapegoat for a tragedy. Also visit leonardpeltierart.com to purchase his artwork. All proceeds go to his defense fund.

Posted by Unknown at 8:00 PM
Email ThisBlogThis!Share to TwitterShare to FacebookShare to Pinterest