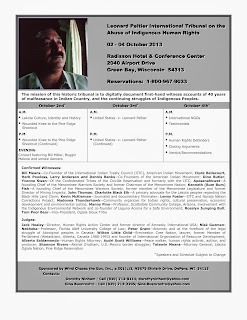 Peter Grant—Attorney in Vancouver, British Columbia, at the forefront of the legal struggle of Aboriginal peoples in Canada; involved with the Peltier extradition

Yvonne Swan—Of the Confederated Tribes of the Colville Reservation and formerly with the International Indian Treaty Council, has worked for the improvement of her community and to protect the environment

Charlotte Black Elk—Political and environmental Indigenous activist, and a primary advocate for the Lakota peoples regarding the Black Hills Land Claim

Madonna Thunderhawk—One of the original members of the American Indian Movement, and a long-time community organizer with experience in Indian rights protection, cultural preservation, economic development and environmental justice

Manny Pino—Professor, Scottsdale Community College, Arizona; has worked with the Indigenous Environmental Network and is co-founder of Laguna Acoma for a Safe Environment

More: http://www.whoisleonardpeltier.info/tribunal.htm
Posted by Unknown at 12:47 PM
Email ThisBlogThis!Share to TwitterShare to FacebookShare to Pinterest