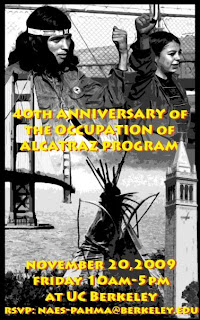 On Friday, November 20th 2009, Richie Richards the Native American Education Specialist for the Phoebe A. Hearst Museum of Anthropology at UC Berkeley proudly hosts the 40th Anniversary of the Occupation of Alcatraz Program. The event will honor and commemorate the original efforts and intentions of the student-based occupation that took place in 1969; which was to protest the social conditions Native Americans were being subjected to in both urban areas and on reservations. Alcatraz provided a national forum for their voices to be heard and we want to continue that conversation with this event.

This program will begin by honoring and giving thanks to those who participated in the occupation and their perspective by reviewing the 1969 occupation. Speakers will discuss the conditions for Native Americans during this time period in response to the governmental policies that continued to strategically enforce cultural assimilation and deny Natives of their basic human rights and rights as sovereign nations.

Our Keynote Speaker will be Dr. LaNada War Jack (formerly LaNada Means). LaNada was the student leader from the Third World Strike which took place at UC Berkeley whose efforts led to the foundation of the Ethnic Studies Program at UCB. She, along with Richards Oakes, organized the take-over of Alcatraz in November, 1969. We are very honored to have her presence at this event and look forward to a great presentation.

Our Honored Guest Speaker will be Dr. Lehman Brightman (President of the United Native Americans, Inc.), who will discuss the founding of UNA Inc., his role as First Director of Ethnic Studies here at UC Berkeley, and his participation in the Occupation. Dr. Brightman recently presented at the 40th anniversary of Ethnic Studies at SFSU and may speak about this presentation as well.

Another element to the event, will include Ilka Hartmann (German photographer from the occupation), who will present a slide show of her photographs and her experiences as a non-Native participant on Alcatraz. Ilka Hartmann has taken some of the more famous photos that we may have seen as well as other photos from past demonstrations of human rights and equality.

During the 40th Anniversary program, students from local universities will present contemporary research and statistics in regards to the current situation of Native America. As students, we will examine and present various subjects including those which were the motivating factors of the occupation. So far, students from UC Berkeley, UC Davis, UC Irvine, and DQ-University Board Members have agreed to come present.

This event is meant to bring together old friends and create new networks. This is an opportunity for Natives to unite once again in solidarity.

*Time and Agenda are currently in development and is subject to change-due to growing interest.

Posted by Unknown at 11:26 AM
Email ThisBlogThis!Share to TwitterShare to FacebookShare to Pinterest