AIM-WEST, Inter-Tribal Friendship House and American Indian Movement (AIM) cordially invite the Bay Area to an afternoon of fundraising activities and information with a theme of political prisoners held in the U.S.

Come learn about the case of American Indian prisoner, Leonard Peltier, incarcerated over 35 years! Yes, longer than Nelson Mandela! It is cruel and inhumane, and Leonard should be released immediately!!

The youth, students and young adults (that’s you!), are especially encouraged to attend and learn about the “reign of terror” that took the lives of over 65 people during 1973-76 in South Dakota. No one has been held accountable for their deaths! And yet Leonard Peltier languishes in prison today.

The program will be aired with live audience on radio KPFA radio FM 94.1 starting at 5 pm to 6 pm with “Flashpoints” hosted by Dennis Bernstein, Miguel “Gavilan” Molina, and special guest Jimbo Simmons.

The evening MC will be Bill “Jimbo” Simmons, AIM-WEST host, with musical performance, along with drummers and singers, the traditional Mexica Azteca Danzantes, prisoner rights advocates, and raffle!

A special showing of film, “Warrior-The Life of Leonard Peltier” This video (starts at 6:30 pm) is officially endorsed by Leonard Peltier (85 minutes): The shocking, true story of Leonard Peltier, the American Indian leader locked away for life in Leavenworth Penitentiary, convicted of aiding and abetting, for the death of two FBI agents during a bloody shoot-out on the Pine Ridge Reservation on June 26, 1975. To understand Peltier’s story, ”Warrior” takes us back to the violent confrontations at Pine Ridge and Wounded Knee in the Seventies, and then to today’s Indian reservations where the government’s plans for uranium mining and waste dumping are still being heatedly resisted by Indian activists. The heart of the film, though, is a detailed painstaking account of Peltier’s harrowing odyssey through the American justice system. 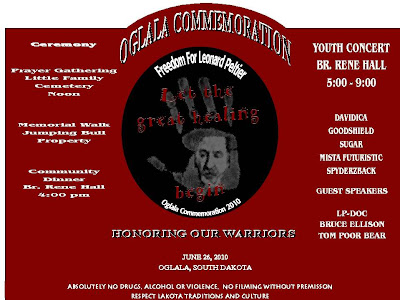 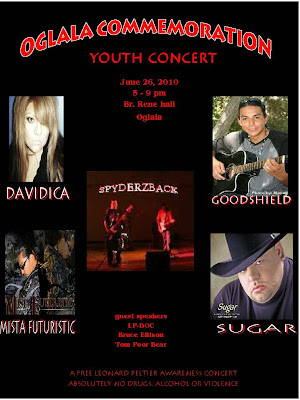 Sponsored by LPDOC Chapter, Silicon Valley, California, USA. For more information, contact Donna at 408-293-4774 or send an e-mail to FreeLeonardPeltier@hotmail.com.

Posted by Unknown at 3:23 PM
Email ThisBlogThis!Share to TwitterShare to FacebookShare to Pinterest