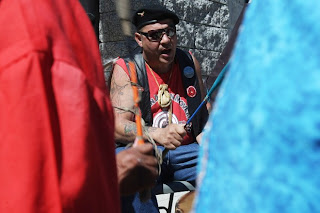 Forty years ago, a group of Native American activists occupied Mount Rushmore for three months as a way to draw attention to the myriad problems facing Indian people in the United States. Yesterday, a reunion by some of the original participants recalled that time, and looked ahead to dealing with the problems that remain. The Rapid City Journal’s Jomay Steen has the story:

“It feels good that we had people who stood up and risked being arrested, losing their freedom at a place that represents freedom,” Cook said, recalling a group of Native American activists who protested and held a three-month-long occupation of the memorial 40 years ago, bringing national attention to Native issues. It wasn’t done on a whim, Cook said, but involved courage to stand up for their beliefs.

A group of the California-based United Native Americans climbed to the top of Mount Rushmore 40 years ago and began a their occupation to educate the nation about Native tribal sovereignty, treaty rights and poverty.

On Sunday, some of the original activists, their children and grandchildren gathered to commemorate the day that the group first scaled the mountain and to revisit those issues that still plague the people living on reservations in South Dakota.

Marlyce Miner of Rapid City was there Sunday. She had worked as a clerk in the gift shop, one of the only Native Americans working at Rushmore, when the occupation began. She watched as the activists abandoned their picket lines to scale Mount Rushmore as a political statement about disputed land claims to the Black Hills.

“They made people aware of Native issues in South Dakota. It all started a movement,” Miner said.

Quanah Parker Brightman began the day-long forum Sunday by singing the flag song and burning sage to purify the participants.

“It had not been since the Battle of the Little Big Horn, when we wiped out Gen. George Armstrong Custer, that we stood up again as a nation,” he said of the takeover of Mount Rushmore in 1970.

The occupation brought national media coverage of the non-compliance of treaty rights, suppression of Native religious ceremonies, the stealing of the sacred Black Hills and a lack of justice for Native Americans, he said.

“We were giving talks down at the amphitheater, while up in the gift shop, they were selling postcards of our dead at Wounded Knee,” he said.

His father, Lehman Brightman, a member of the Cheyenne River Sioux Tribe, was an education doctoral candidate at University of California-Berkeley. The 80-year-old retired professor has worked as an activist throughout his life, participating in the occupations of Mount Rushmore, Alcatraz, Wounded Knee in 1973 and countless demonstrations throughout California.

Brightman had chartered a bus and brought students to the state to protest discrimination and the wrongs being done to the Lakota at that time, according to Gay Kingman, executive director of the Great Plains Tribal Chairman’s Association.

“He believed in getting the Black Hills back for the people. He wanted to make a statement about that. It was one of the reasons he went up to the top of Mount Rushmore,” Kingman said.

Forty years later, she said, they have changed methods – holding a tribal sovereignty forum instead of a protest and working toward education about the ongoing effort to get land returned to the tribes rather than an occupation.

“The thing I thought that they did well was that they brought attention to the plight of the Lakota people,” Marcella Le Beau, 90, of Eagle Butte said. “I think they achieved that today.”

Posted by Unknown at 12:15 PM
Email ThisBlogThis!Share to TwitterShare to FacebookShare to Pinterest