The group called Peltier, a Native American activist convicted in 1977 for the murder of two US FBI agents, the longest serving political prisoner in the Americas. The case stemmed from a shootout at a reservation in the US state of South Dakota.

"Leonard Peltier, who on September 12, 2011 will turn 67, has spent more than half his life in prison. He is a symbol of resistance to repressive state policies by the United States, where there are people in jail for ethnic, racial, ideological and religious reasons," a foundation statement said.

Ricardo Elena, a member of the foundation's honorary board, said Peltier's case "is one that is repeated over and over: violation (of rights); persecution, eviction, invasion and expropriation of the indigenous people from the time it was 'discovered' until now.

"It did not just happen in the United States; it is happening in southern South America with the (indigenous) Mapuche people, and with indigenous people in North America," he stressed.

Peltier, whose family is indigenous Chippewa and Lakota, fled to Canada after the shooting and was later extradited. He was convicted in part based on the testimony of a woman, Myrtle Poor Bear, who claimed she was his girlfriend and witnessed the shootings. Poor Bear however admitted later she was pressured to make the testimony, but a judge blocked her testimony.

Elena took a swipe at the United States saying it "likes to think it is the seat of democracy, but it has political prisoners just like a dictatorship might have."

The Mario Benedetti Foundation was set up to support human rights and cultural causes in synch with the work of the Uruguayan writer who died in 2009. 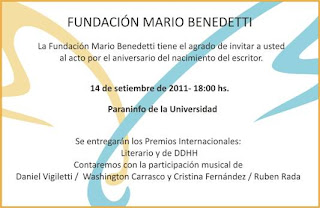