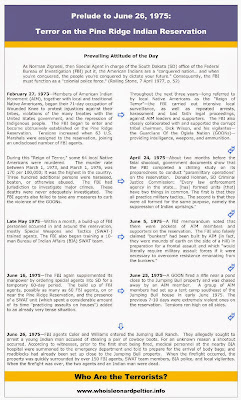 Prelude to June 26, 1975: Terror on the Pine Ridge Reservation
Native American activist Leonard Peltier has spent nearly 40 years in prison for a crime he did not commit. Prosecutors and federal agents manufactured evidence against him (including the so-called "murder weapon"); hid proof of his innocence; presented false testimony obtained through torturous interrogation techniques; ignored court orders; and lied to the jury.
What led to the firefight on 26 June 1975?  Our infographic shows that a series of events made the conflict inevitable.


Leonard Peltier has been widely recognized for his humanitarian works, winning honors including but not limited to:


In 2009, for the sixth consecutive year, Leonard Peltier also was nominated for the Nobel Peace Prize.
Learn more:  www.whoisleonardpeltier.info

Posted by Unknown at 2:00 AM
Email ThisBlogThis!Share to TwitterShare to FacebookShare to Pinterest