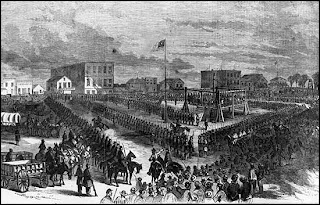 In peace and friendship the Dakota ceded 21 million acres, over half the territory of Minnesota, many waters in Dakota language; in the 1851 Traverse des Sioux Treaty of Peace and Friendship. Despite federal promises of protection and assistance, at the Minnesota River reservations, the Dakota Santee were badly mistreated by corrupt federal Indian agents and contractors. This non-fulfillment of treaty promises issue resulted in the Dakota Santee Sioux being found guilty by military court of joining in the so-called "Minnesota Uprising." This avoidable tragedy was actually part of the wider Indian conflicts that plagued the West during the second half of the nineteenth century. For nearly half a century, the US govt. had been selling land in the west to pay for past and current wars domestic and abroad. Anglo and German settlers invaded the Dakota Santee Sioux territory in the beautiful Minnesota Valley, and government pressure gradually forced the Dakota Indians to relocate to smaller reservations along the Minnesota River.

Abuses continued at the Minnesota River reservations during July 1862 with the agents pushing the Dakota Indians to the brink of starvation by refusing to distribute stores of food because they had not yet received their customary kickback payments. The contractor Andrew Myrick callously ignored the Santee's pleas for help. He said, “Let them eat grass.”

Outraged and at the limits of their endurance, the Dakota Santee finally struck back, killing Anglo settlers and taking women as hostages. The initial efforts of the U.S. Army to stop the Santee warriors failed, and in a battle at Birch Coulee, Dakota Santee Sioux killed 13 American soldiers and wounded another 47 soldiers. However, on September 23, a force under the leadership of General Henry H. Sibley finally defeated the main body of Dakota Santee warriors at Wood Lake, recovering many of the hostages and forcing most of the Indians to surrender. The subsequent five-minute trials of the prisoners gave little attention to the injustices the Indians had suffered on the reservations and largely catered to the popular desire for revenge. Injustice moved very rapidly through the trials of the accused. Here, in its entirety, is Case # 241: Pay-pay-sin

Prisoner states, “I was at Fort Ridgley and stood near the stable. I fired three shots.”

The Military Tribunal found him guilty and ordered he be hanged.

The revered Anglo- Saxon principle of law that a person is considered innocent until proven guilty was reversed in the case of the Indians. Authorities in Minnesota asked President Lincoln to order the immediate execution of all 303 Indian males found guilty. President Lincoln was under heavy political pressure to acknowledge states rights but he objected to what he viewed as wholesale slaughter. Lincoln was concerned with how this would play with the Europeans, whom he was afraid were about to enter the war on the side of the South. He wired the commanding officer to stay the executions and forward the "full and complete record of each conviction." He also ordered that any material that would discriminate the guilty from the questionable be included with the trial transcripts. Lincoln and Justice Department officials reviewed every case. Episcopalian Bishop Whipple pleaded for clemency but Military leaders and the Minnesota state politicians warned Lincoln that anything less than large-scale hangings would result in widespread white outrage and more violence against the Indians. After review, the president pardoned 265 of the 303 condemned Indians, approving a total of 38 executions. He offered the following compromise to the politicians of Minnesota: If they would pare the list of those to be hung down to 39. In return, Lincoln promised to kill or remove every Indian from the state and provide Minnesota with 2 million dollars in federal funds. This eagerness to buy cooperation from the state in spite of the fact that the Federal government still owed the Sioux 1.4 million for the land is both tragic and ironic.

So, on December 26, 1862, the Great Emancipator ordered the largest mass execution in American History, where the guilt of those to be executed was entirely in doubt. After 38 of the condemned men were hanged on the 26 of December, the day after Christmas, in 1862 in what remains the largest mass hanging in United States history, the other prisoners continued to suffer in the concentration camps through the winter of 1862-63.

NAMES OF THE EXECUTED INDIANS

In late April of 1863 the remaining condemned men, along with the survivors of the Fort Snelling concentration camp, were forcibly removed from their beloved homeland in May of 1863. They were placed on boats, which transported the men from Mankato to Davenport, Iowa where they were imprisoned for an additional three years. Those from Fort Snelling were shipped down the Mississippi River to St. Louis and then up the Missouri River to the Crow Creek Reservation in South Dakota.

Posted by Unknown at 12:00 AM
Email ThisBlogThis!Share to TwitterShare to FacebookShare to Pinterest