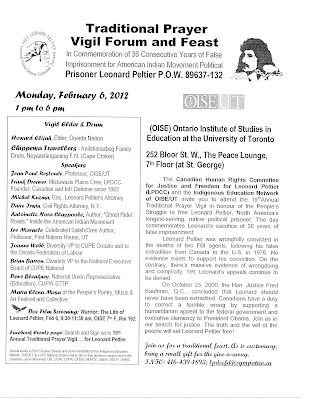 Leonard Peltier was wrongfully convicted in the deaths of two FBI agents, following his false extradition from Canada to the U.S. in 1976. No evidence exists to support his conviction. On the contrary, there is massive evidence of wrongdoing and complicity. Despite this, Leonard’s numerous appeals continue to be denied. On October 25, 2000, the Hon. Justice Fred Kaufman, Q.C., concluded that Leonard should never have been extradited from Canada on the basis of what was discovered to be fabricated evidence. Canada has played a large role in Leonard's case, and has a duty to correct its wrong by supporting a humanitarian appeal to the Canadian government, and a request for clemency to President Obama. Join us in our search for justice. The truth and support of the people will one day set Leonard Peltier free!

Speakers and discussion taking place on the 7th Floor, Peace Lounge of the OISE building.

Traditional Feast will be provided for everyone at 5 pm.

Joanne Webb, Diversity VP to CUPE Ontario and to the Ontario Federation of Labour

Brian Baron, Diversity VP to the National Executive Board of CUPE National