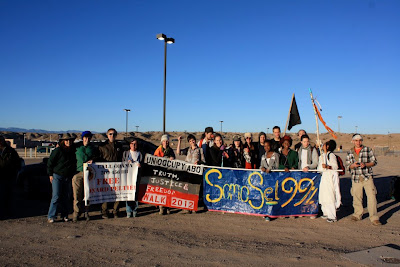 Members of the (Un) Occupy Albuquerque Movement spent three days walking from Albuquerque to Santa Fe, and arrived at the Occupy Santa Fe site this Sunday evening. This effort was undertaken in solidarity with the Leonard Peltier Walk for Human Rights which left Alcatraz, CA, on December 18, 2011, and will end in Washington, DC, on May 18, 2012. The walkers from (Un) Occupy were met with enthusiastic support from the public all along the length of their journey. The Governor of the Pueblo of San Felipe, Anthony Ortiz, provided a welcoming escort, safe camping area and facilities for the group on Saturday. Members of the Pueblos of Santa Domingo, Cochiti and Santa Ana stopped to voice their support and gave gifts to the walkers.

Posted by Unknown at 1:34 PM
Email ThisBlogThis!Share to TwitterShare to FacebookShare to Pinterest